Date A Boy Who Travels

Date A Boy Who Travels, by Lena Desmond at lainnnes. Lena did a great job with this article. Click on her name to follow her on the social networks!

Date a boy who treasures experience over toys, a hand-woven bracelet over a Rolex. Date the boy who scoffs when he hears the words, “vacation”, “all-inclusive”, or “resort”. Date a boy who travels because he’s not blinded by a single goal but enlivened by many. 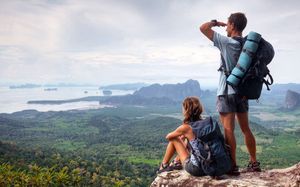 You might find him in an airport or at a book store browsing the travel guides – although he “only uses them for reference.”

You’ll know it’s him because when you peek at his computer screen, his background will be a scenic splendor of rolling hills, mountains, or prayer flags. His Facebook friend count will be over-the-roof, and his wall will be plastered with the broken English ‘miss-you’ of friends he met along the way.

When he travels, he makes lifelong friends in an hour. And although contact with these friends is sporadic and may be far-between, his bonds are unmessable and if he wanted, he could couch surf the world… again.

Buy him a beer. Once a traveller gets home, people rarely listen to their stories. So listen to him. Allow him to paint a picture that brings you into his world. He might talk fast and miss small details because he’s so excited to be heard. Bask in his enthusiasm. Want it for yourself.

He’ll squeak like an excited toddler when his latest issue of National Geographic arrives in the mail. Then he’ll grow quiet, engrossed, until he finishes his analysis of every photo, every adventure. In his mind, he’ll insert himself in these pictures.

He’ll pass the issue on to you and grill you about your dreams and competitively ask about the craziest thing you’ve ever done. Tell him. And know that he’ll probably win. And if by chance you win, know that his next lot in life will be to out do you. But then he’ll say, “Maybe we can do it together.”

Date the boy who talks of distant places and whose hands have explored the stone relics of ancient civilizations and whose mind has imagined those hands carving, chiseling, painting the wonders of the world. And when he talks, it’s as if he’s reliving it with you.

You can almost hear his heart racing. You can almost feel the adrenaline ramped up by the moment. You feel it passing through his synapsis, a feast to his eyes entering through those tiny oracles of experience that we call pupils, digesting rapidly through his veins, manifesting into his nervous system, transforming and altering his worldview like a reverse trauma and finally passing, but forever changing the colors of his sight. (Unless he’s Karl Pilkington.) You will want this too.

Date a boy who’s lived out of a backpack because he lives happily with less. A boy who’s travelled has seen poverty and dined with those who live in small shanty’s with no running water, and yet welcome strangers with greater hospitality than the rich.

And because he’s seen this, he’s seen how a life without luxury can mean a life fueled by relationships and family, rather than a life that fuels fancy cars and ego.

He’s experienced different ways of being, respects alternative religions and he looks at the world with the eyes of a five-year-old, curious and hungry. Your dad will be happy too because he’s good with money and knows how to budget.

This boy relishes home; the comfort of a duvet, the safety stirred in a mom-cooked meal, the easy conversation of childhood friends, and the immaculate glory of the flush-toilet. Although fiercely independent, he has had time to reflect on himself and his relationships. Despite his wanderlust, he knows and appreciates his ties to home.

He has had a chance to miss and be missed. Because of this, he also knows a thing or two about goodbyes. He knows the overwhelming uncertainty of leaving the comforts of home, the indefinite see-you-laters at the departure gates, and yet he fearlessly goes into the unknown because he knows the feeling of return. And that the I’ve-missed-you-hug is the best type of hug in the whole world.

He also knows that goodbyes are just prolonged see-you-laters and that ‘hello’ is only as far away as the nearest internet cafe.

Don’t hold onto this boy. Let this boy go and go with him. If you haven’t travelled, he will open your eyes to a world beyond the news and popular perception. He will open your dreams to possibility and reality.

He will calm your nerves when you’re about to miss a flight or when your rental blows a flat, because he knows the journey is the adventure. He will make light of the unsavory noises you make when you – and you will – get food poisoning.

He will make you laugh through the discomfort all while dabbing your forehead with a cold cloth and nursing you with bottled water. He will make you feel like you’re home.

When you see something beautiful, he will hold your hand in silence, in awh the history of where his feet stand, and the fact that you’re with him.

He will live in every moment with you, because this is how he lives his life. He understands that happiness is no more than a string of moments that displace neutrality, and he is determined to tie as many of these strings together as he can.

He also understands your need to live for yourself and that you have a bucket list of your own.

Understand his. Understand that your goals may at some points differ, but that independence is the cornerstone of a healthy relationship when it’s mutually respected.

You may lose him for a bit, but he will always come home bearing a new story and a souvenir he picked up because it reminded him of you, like it was made for you, and because he missed you.

You might be compelled to do the same. Make sure that independence is on your bucketlist, and make sure it’s checked. Independence will keep your relationship fresh and exciting, and when you’re together again it will forge a bond of unbreakable trust.

He’ll propose when you’ve breached your comfort-zone, whether it be a fear like skydiving or swimming with sharks, or sitting next to the smelly person on an overcrowded bus. It won’t be with a diamond ring, but with a token from a native culture or inspired by nature, like the penguin and the pebble.

You will get married somewhere unassumed, surrounded by a select few, in a moment constructed to celebrate venturing into the unknown together again. Marry the boy who’s travelled and together you will make the whole world your home.

Your honeymoon will not be forgotten to a buffet dinner and all-you-can-drink beach bars, but will be remembered in the triumphant photographs at the top of Kilimanjaro and memorialized in the rewarding ache of muscles at the end of a long days hike.

When you’re ready, you will have children that have the names of the characters you met on your journeys, the foreign names of people who dug a special place in your heart if only for a few days.

Perhaps you will live in another country, and your children will learn of language and customs that open their minds from the very start, leaving no room for prejudice. He will introduce them to the life of Hemingway, the journey of Santiago, and empower them to live even bigger than both of you.

Marry a boy who travels and he’ll teach your children the beauty of a single stone, the history of the Incas and he will instill in them the bravery of possibility. He will explain to them that masking opportunity, there is fear. He will teach them to concur it.

And when you’re old, you’ll sit with your grandchildren pouring over your photo albums and chest of worldly treasures, while they too insert themselves into your photographs, sparked by the beauty of the world and inspired by your life in it.

Because this is where you will find joy. And better, you will find joy together. And if you can’t find him, travel. Go. Embrace it. Explore the world for yourself because dreams are the stuff reality is made from.

James Russell Lingerfelt’s note: Due to the context and title of her article, one would think Lainnnes is writing, “boys who don’t travel aren’t worth dating.” But don’t misunderstand her. Her point is, “a man with these character qualities is what I’m looking for” (which in her observations and experience, many gain once their global views are broadened).

Many young women have found encouragement from her words, especially those who’ve heard a lot of “rich, good looks, and charm is what counts in a mate.” Notice her article’s focus on character development rather than travel in and of itself. Anyone can enjoy a foreign vacation.

But not everyone will allow themselves to be changed for the better after life’s various experiences. So for those young men who are not able to travel, take heart. Read her description of a lovely man, take what you wish from it, and wonder why this article received 490,352 hits in two weeks and over 300 comments (mostly from women praising the article).

This article first appeared as Date a boy who travels, by Lena Desmond. Click on Lena's name to follow her on the social networks!
---