7 Steps To Being A Person Others Want To Be Around

7 Steps To Being A Person Others Want To Be Around by Michael Hyatt. See below for details. 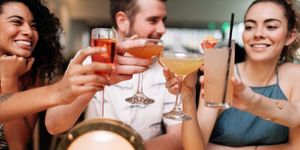 Several months ago, my wife, Gail, and I attended an industry mixer at a conference we were attending. Almost immediately, I was cornered by an author who proceeded to complain about all the incompetent people in his life.

He grumbled about his literary agent, his booking agent, and his publisher. No one, it seems, measured up to his standards. I tried to change the subject, but he persisted.

The conversation made me feel very uncomfortable. I finally had enough and excused myself. I felt a little rude, but I didn’t want to steep in his brew of negativity.

Complaining about others has the potential to hurt you in four specific ways.

I remember when I bought my first Lexus. I never really noticed Lexus cars before. But suddenly, they seemed to be everywhere. This demonstrates the principle that you see more of what you notice. If you focus on people’s faults, you will find even more of them.


2. It makes you miserable.

My author friend was not happy. His humor was biting and sarcastic. He seemed entitled and discontent. His attitude was highly toxic—which was why I felt the need to get away from him. He was contagious!

One of the consequences of complaining is that healthy people don’t want to hang around you. They avoid you. As a result, you miss scores of great opportunities, both social and business ones.

This is perhaps the saddest consequence of all. As my friend was complaining about others, I began to wonder, What does he say about me when I am not around? I then instinctively thought, I don’t trust him.

After I left the presence of my negative friend, I bumped into an agent friend, who is one of the most positive, encouraging people I know. He told me about all the great things happening in his life and business.

Whenever he mentioned someone’s name, he raved about them. He exuded gratitude. I didn’t want to leave his presence. It was like balm to my soul.

My second friend was such a contrast to the first, it made me realize these are two entirely different mindsets and approaches to life. The good news is that if you are a negative person, you don’t have to stay that way.


Here are 7 steps to reversing this pattern and becoming a happy person others trust and want to be around.

Are you a negative person? Do you tend to see the glass half empty or half full? If you are in doubt, ask your spouse or a close friend for candid feedback. Negativity is costing you more than you know. Frankly, it’s like having bad breath or b.o.

What need are you attempting to meet by complaining? Perhaps the need for connection? Maybe a need for significance? Are there better, more healthy ways to meet these needs?

Complaining is a habit. And like all bad habits, change begins when you own your behavior and make a decision to change. It doesn’t have to be a long, drawn out process. It will take conscious effort at first, but it will become automatic over time. You can start today.

The most powerful change happens when we modify our identity. When I declared myself an athlete, daily exercise suddenly became easier. What if you said to yourself, I am a positive, encouraging person? How would your behavior change?


5. Greet others with a smile.

While smiling has this impact on you, it also has a similar impact on others. This is one reason they unconsciously want to be around you.


6. Catch them doing something right.

7. Speak well of others.

Your mama’s advice was right: “If you don’t have something positive to say, don’t say anything at all.”

While complaining about others may hurt them, ultimately it hurts you the worst. By becoming more aware and more intentional, you can become a person others seek out and want to be around.

This article first appeared as 7 Steps To Being A Happy Person Others Want To Be Around by Michael Hyatt. Click on Mr. Hyatt's name to follow him on the social networks!