7 Reasons Why You Should Never Go Back To A Cheater

7 Reasons Why You Should Never Go Back To A Cheater by Brittany McSorley. See details below. 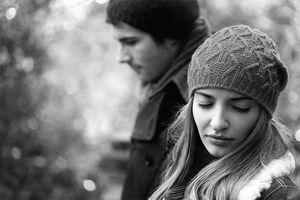 These days, it seems like every person has fallen victim to an unfaithful significant other. At the very least, we all know somebody who’s been cheated on and probably, someone who’s cheated.

Becoming more and more common, though, are the people who have forgiven a cheating boyfriend or girlfriend and tried to carry on with the relationship.

Sometimes, this works out and the two live happily ever after because the cheater saw the error in his or her ways and never strayed again. However, this scenario is definitely the exception to the rule, despite it being what you tend to hope for when you’re the one who’s been betrayed.

People who forgive cheaters and stay together know how disastrous it can become. Here are seven reasons not to go back to dating cheaters:

Really think about this one. Cheaters who apologize profusely and give all sorts of excuses for their behaviors may very well feel remorse, but something still overpowers that feeling long enough for them to cheat.

Example: “I was going to tell you, but I didn’t want to hurt you.” Right.


2. No matter what, you won’t trust them again.

Whatever motivation was there to cheat in the first place will remain in the back of both of your minds.

This can get exponentially worse depending on with whom the cheater cheated. If you know the other person, everything about it will suck for a pretty long time.

Example: “You’re going where? Is SHE going to be there?” Probably.

3. They don’t love you enough.

This may be the simplest reason not to go back, but still the hardest reason to accept. The person who cheats on you does not love you enough to stay faithful, no matter what other crap is included in the list of excuses.

Example: “You’re so great. I’m not good enough for you. I just liked the attention.” I am, you’re right and CLEARLY.


4. They pretty much always do it again.

Even if it’s on a subconscious level of which he or she is not totally aware, staying with a cheater sends the message that the act wasn’t actually so bad.

This also leads to an expectation from the cheater that you will eventually just get over it.

Example: “I thought we moved past this! I can’t pay for it forever!” Good to know you’ve moved past it.

This is what makes cheating so unfair and hard to handle, but maintaining the relationship ensures that you’ll feel like crap for a whole lot longer.

Example: “It had nothing to do with you!” Yeah, I KNOW.


6. The relationship is incredibly unbalanced, with the faithful partner caring so much more than the unfaithful one.

That balance will probably never be restored, no matter what kind of post-cheating promises are made.

Example: “From now on, I’ll treat you like you deserve to be treated.” Ah, romantic.


7. People exist who are totally capable of not lying to the person they’re dating.

If you’ve been cheated on, you’re in the wrong relationship. Your tainted relationship doesn’t deserve any more of your attention or hard work. Nobody should need to hurt in order to realize that you actually are important.

Example: “It just confirmed how much I care about you.” So sweet.

Kicking a person to the curb after he or she hurts you can be much more difficult than it sounds. But, it’s almost always a huge mistake to stay with someone who broke your trust, no matter the surrounding circumstances.

I see it happen constantly and the cheated always deserves better. If you’re ever in that unfortunate situation and the cheater asks to remain in your romantic life, think about what factors are influencing your decision.

This article first appeared as 7 Reasons Why You Should Never Go Back To A Cheater by Brittany McSorley. Click on their names to follow them on the social networks!